Frazer wrote:I was wondering how you guys arrange the narration & music and radio calls during a live show. Could you give an insight of who is doing what in Ventrilo? Just some tips and tricks.

It's really not too hard, minus a lot of prep work to pre-mix all the music tracks and rehearse the narration script etc. The actual arrangement is really quite simple, and you can ask Thumper for any details as he's the mastermind behind this...

We use two Ventrilo channels: Channel A) Pilots, Operations Officer and; Channel B) Narrator/DJ and streaming crew (cameraman).

The cameraman sits in Channel B and records "everything he hears" (just as he records "everything he sees" in game). The narrator/DJ then plays the (pre-mixed) songs via Ventrilo at the correct moment in Channel B and narrates at the correct time in this channel so that maneuvers fit together in a big timing puzzle and the correct parts of each song plays at the right moment. The music and mic levels are adjusted for distortion, output, and to make sure the narrator can "override" the loudest songs, but also so that the music is loud enough to pick up the softest tunes during sound checks.

Side note: This also means the narrator/DJ has to know the show timing like the back of his hand (just like all the pilots), and assume that every pilot flies his or her pre-briefed speed parameters in order for the narration window and music "hits" to occur at the right time. For example: It takes the Solos 16 seconds to fly from 12,000ft to show center at 450 KCAS (as seen in opposing maneuvers). The music in these maneuvers is pre-mixed so that the "hit" happens in 14-17 (~16) seconds into the song (depending on the song's beat per minute), and the narrator has about the same time to finish reading the script for that maneuver, but aims to finish no later than in half that amount of time (by the time the Solos are calling "6,000"). Other music tracks continuously play for a longer period of time, but have certain parts of the music further into some tracks that we'd want presented for a pass (such as the Delta Series). In this case the tracks are mixed so that the average time it takes the formation to complete the reposition and be back at show center matches the length of the track until the part we want to play is mixed together for the audience. (It takes a lot of work pre-mixing the music seamlessly and matching it to the second for each maneuver and reposition - but that's how we do it with unbelievable attention to detail. Most of the time we're only a second or two off since the show timing goes hand-in-hand with the music and narration).

Whenever we want to re-tran (re-broadcast) our comms, the narrator uses a "Ventrilo phantom" (copy of himself that he can mute/un-mute) in Channel A where the pilots are and broadcasts this back into Channel B where the streaming audio is being recorded by the cameraman. This gives the narrator/DJ the ability to choose when and what comms get re-transmitted, while the pilots are completely unaffected by it. (They only hear themselves and No. 7 - no music or narration throughout the entire show, and this helps keep the radio calls sterile).

There are also a few times when the narrator/DJ needs to coordinate with the team (mainly during the ground show), and that's done between our No. 7 (who's in Channel A with the pilots, but also uses a "Ventrilo phantom" to listen in on the music and narration in Channel B) and our No. 8 (who's in Channel B with the cameraman, but listens in on the comms in Channel A). The reason for the coordination is so that the pilots start their engines, begin taxi and takes off at the correct moment in the narration script and allows for re-tran'ed check-ins as well. No. 7 is the "link" between the Boss and the Narrator so that we all synch up without having the Boss or Narrator do any additional coordination on their own (much like the way it works in real life). Otherwise, the pilots are by themselves and can communicate as needed while performing the show without interfering with the music or narration, while No. 8 still adjusts the music "hits" and narration in real time by delaying or starting tracks to synch everything based on show timing and the pilot's calls.

This setup, as explained above, requires three addl. people aside from the pilots on our squad: A cameraman, a narrator/DJ (our No. 8, Advance Pilot/Narrator) and a coordinator (our No. 7, Operations Officer). This brings the minimum number in our crew to nine (six pilots, two support officers and one cameraman) to perform a 6-ship live show. Each person is also in-game watching live (however, our narrator/DJ uses a separate computer for the music and narration).

Hope this insight helps explain "How It's Done".

I'll leave it to Thumper's discretion to answer any technical details.

That pretty well covers it at a high level, Boss, with one exception. The phantom that is used for the re-tran is actually dragged and dropped into the live "team comms" channel. IIRC, Ventrilo sees your phantom as being you and will not allow you to mute/unmute it because you would be muting yourself. I could be wrong on that but I think that's how it happened in testing.

For that reason it was necssary to physically move the phantom into the team channel. You want to be sure NOT to leave your phantom in a public channel because it will cause you to transmit any chatter it picks up to your audience. I put my phantom in our locked "Recording" channel so nobody will jump in and talk to it!

As I never really tried all this, could you also explain how music is played right in to Ventrilo (without going through the air)?
I suppose this is also used for re-tranning the team comms in to the B channel?

By the way, would be good to post this in the VFAT Tech Corner

Frazer wrote:...could you also explain how music is played right in to Ventrilo (without going through the air)?
I suppose this is also used for re-tranning the team comms in to the B channel?

The narrator/DJ needs to have either Ventrilo (or his audio panel settings) record "What U Hear" or the equivalent (that's what Sound Blaster calls it). Some onboard sound devices (Mobo sound devices) don't allow for this, so the narrator/DJ would preferably have to use a dedicated sound card (e.g. Sound Blaster X-Fi). This setup allows the narrator/DJ to "re-broadcast" everything he hears via Ventrilo. It also means, however, that he will need to keep his mic feedback (playback of his mic in his own speakers) unmuted so it also becomes part of "What U Hear". The narrator/DJ can choose whether to use a PTT or have Ventrilo setup to transmit anytime there's sound being played. This is easily done in the Ventrilo Setup screen (PTT Mode vs. setting up the Sensitivity and Silence Time for an "open mic").

Here are some screenshots to help illustrate how to play music directly from the computer's sound card and output it via Ventrilo. Different sound cards may have different labels than "What U Hear", but as long as it's a dedicated sound card (not a Mobo sound device) it should have something similar to what's seen here using the Sound Blaster X-Fi card.

X-Fi Audio Panel: Notice how the REC is selected to "What U Hear" instead of "Microphone" as it would normally be. Also note that the checkbox to mute the Microphone playback is unchecked on the slider next to the REC selector/slider. 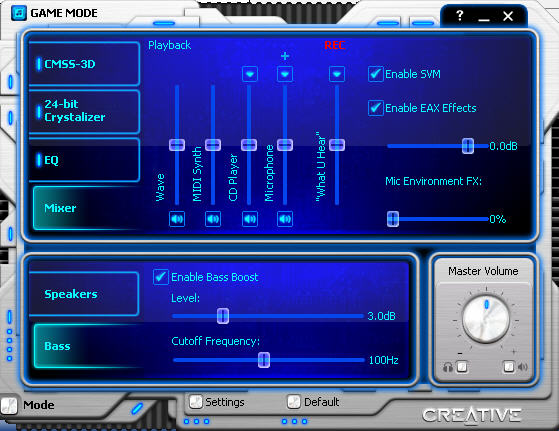 Ventrilo Setup: Under "Hardware input mixer - Line", select "What U Hear" instead of "Microphone". Note that you'll still need to go outside Ventrilo and unmute your mic playback in the audio control panel to pick up your mic via "What U Hear" though. 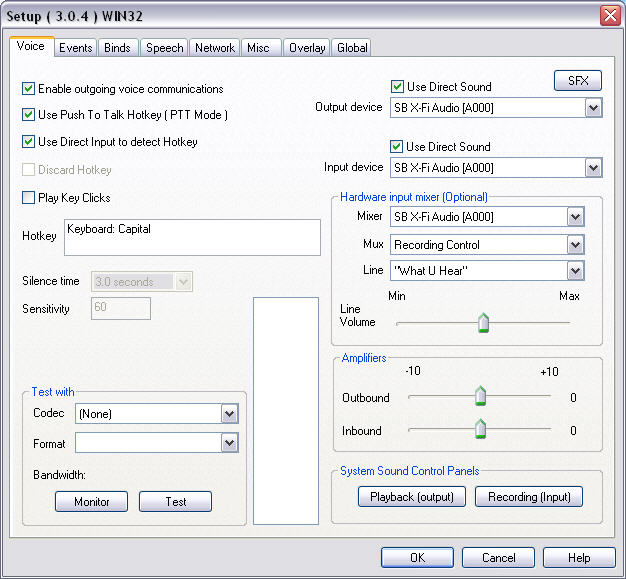 This probably sounds confusing, but to clear things up a little, I use a headset to listen to the music tracks I'm broadcasting and to narrate. I use a desktop mic and regular PC speakers to listen to team comms... That's why you hear a little team chatter bleeding through occasionally, my mic picks up team comms coming over the speakers.

It's a lot to deal with at one time, team comms, music, narration, keeping track of the diamond and both solo's in 3D space in real time via map view, watching aircraft inbound to the show line on the F11 cam on another machine, listening for verbal cues on team comms or watching for visual cues during the show on one of three monitors... I think you get the picture.

Despite all of the practice and teamwork, it never goes perfectly but we strive for perfection in every performance. You may or may not have noticed the fumbles on my end during different shows in the last couple of years. If you didn't notice them, it's not because they weren't there but because we train for almost every contingency. For every issue that arises there is a procedure in place to help me get the show back on track. The countless hours of obsessing over the details doesn't hurt, either.

My job definitely isn't the most glamorous job on the team, but it does play a big part in the overall perception of the show. The music sets the mood and the narration lets the crowd know where to look and what's coming next. Overall, my goal is to help achieve the illusion of a realistic airshow environment and if I mess up it's usually pretty obvious.

Just a quick question, but what does it mean when the Solos call 6000?
Top

Razgriz wrote:Just a quick question, but what does it mean when the Solos call 6000?

All these are examples of distance references from show center, used throughout the show by both the Diamond and Solos. Many other calls coincide with these set distances as well, even if the pilot doesn't call a "number" per se. The show is very tightly scripted and choreographed, and based on when a certain call happens everybody knows where that pilot is, and at what parameters (helps keep the situational awareness high).

Return to “The Demo”