Thursday, November 23, the Virtual Thunderbirds are releasing a new feature presentation for download: Smoke On! This movie will be premiere in a theater in conjunction with Aviation Nation, Las Vegas, NV November 9. See this thread for further details on the theatrical release/event and meeting the team during the Aviation Nation air show.

The online release of Smoke On will feature: Needless to say, this will be a quite substancial download and ground breaking quality and length for any flight simulation video. 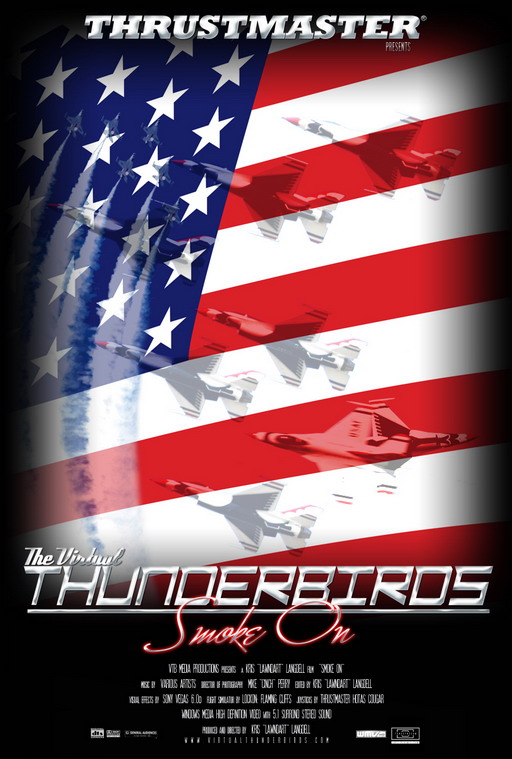 Would like to know more about what "Dyna Cam" is once you release to upcoming movie if it isn't a trade secret.

Love the intro work..did you use After Effects?

Looking forward to the final product.

Awesome guys. Good luck on the Video. I AM REALLY looking forward to it.
Top

Would like to know more about what "Dyna Cam" is once you release to upcoming movie if it isn't a trade secret.

Love the intro work..did you use After Effects?

Looking forward to the final product.

You'll just have to wait and see what Dyna Cam is!

The intro effects are all made in Sony Vegas and PhotoShop. This entire trailer was put together in approx 4 hours (not counting the actual flying of course)! The movie has been in the workshop for 6 months already since editing first began; however, over the course of the summer it was halted because of vacations.

You'll find more of the same effects as seen in the intro part of the movie as well, but also more effects in the video footage itself. Each clip and frame has been handmade to an extent with video FX, realistic cameraman movement and more throughout the entire 50 minute feature. Add tons of sound FX to that and the immersion factor is tons greater!

Just to give you an idea: As mentioned the trailer took hours to make, the movie took almost half a year. The trailer had one audio track and one video track at the end of production. The movie has 6 simultaneous audio tracks (divided between sound FX, music and lots more) and an additional 6 simultaneous video tracks (total combined 12 tracks) including video footage, imagery, overlays, video FX and simultaneous video with multiple cameras. The timeline is quite massive in comparison with the total amount of project files in the thousands!

Needless to say, it's been a lot of work and the trailer was just a spin-off from the scrap footage or cutting room floor, put together last minute to get word out and announce our presence for November!

Glad you liked it!

The intro effects are all made in Sony Vegas and PhotoShop.

Impressive LawnDart...need to take some notes I see. I have Vegas 7 but I didn't know it could do that effect...Vegas is a amazing product.

Nothing touches Vegas when it comes to SFX.


You'll just have to wait and see what Dyna Cam is!

Looking forward to this movie!

Look for the full feature movie link to be activated through the movie page approximately 2100 GMT (1600 Eastern Time), Thursday, November 23, 2006.

Hey is your trailer watchable for people that have epilepsy because it is quite fast?
Top

Hey is your trailer watchable for people that have epilepsy because it is quite fast?

That's impossible to tell as none of us have epilepsy to my knowledge and we haven't heard of anyone having any problems with watching the trailer or with the pace of the trailer.

Jonnyb wrote:Hey is your trailer watchable for people that have epilepsy because it is quite fast?

If you want to, feel free to do a research study on it and let us know the results! Although it would probably be more worth while to write a hypothesis about MTV causing seizures for people with epilepsy rather than our trailer...

Johnny B, 'just curious if anyone had seizures watching your VFAT movie?

Just to clear up any misunderstanding and for those worried about the size of our new, full length movie, "Smoke ON", it is in 4 parts to make for easier download and I believe it is a zip file. No matter how long it takes, it will be worth every minute! Tomorrow is the day we have waited for for over a year. Hat's off to LD and the tremendous work he did to make this movie possible. This is NOT just another combat video clip. This movie was worthy of being shown on a 40 by 70 screen with surround sound. . .and surely it was! So download it, crank it up and enjoy!! The bar for home studio production has been raised high. . . very high.

Ok, MY computer has a little problem with zip video files, BUT I got a new kind of Zip program that I hope that will work.

Use Winrar. In all the years I've used it I have never come across anything it could not unzip.
Top

i am a "check the page" junky for sure today